2021 Ford F-150 Raptor Is Now in its Third Generation, And It’s Better Than Ever

The widespread love the Raptor currently enjoys is only sure to flourish with the arrival of the supercharged V8 R model that’ll be arriving soon. Until then, inevitable comparisons to the Ram TRX are unavoidable.

HOME 2021 Ford F-150 Raptor Is Now in its Third Generation, And It’s Better Than Ever 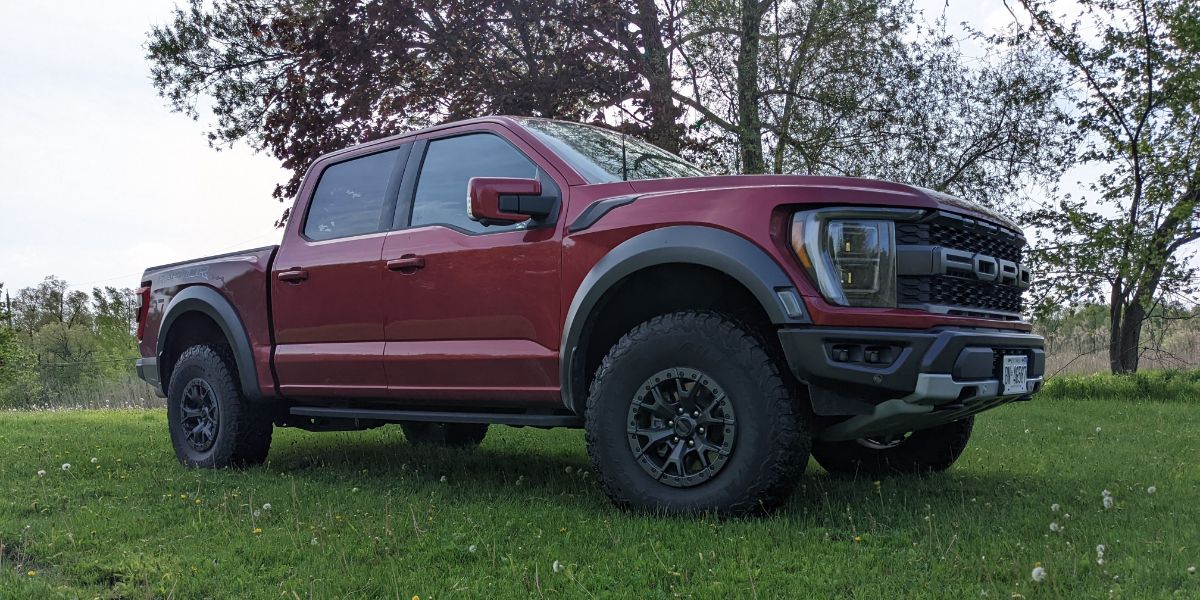 LOWS: Can’t keep up with a RAM TRX, not your friend in tight urban spaces, thirst for premium gasoline.

THE VERDICT: The Ford F-150 Raptor is still a very charismatic truck, and will be even more so when the Raptor R arrives soon.

The Ford F-150 Raptor is one of the few vehicles in the automotive universe that is universally liked. Anyone who has encountered this truck has nothing but glowing praise- owners and would-be owners alike- and for good reason. This is an exceptionally special truck, and that much becomes apparent to anyone who has spent time behind the wheel, while sitting shotgun or stretching out in the palatial rear seats. In fact, looking back to each time we have encountered this truck there was very little that threatened to wipe the massive grin off our faces. We summed it up in our most recent review thusly: “if there is a truck out there that is more capable, fun and generally cooler than the F-150 Raptor, we’d like to see it.”

Granted, that was published before Ram unleashed its bonkers Hellcat-powered TRX pickup, but despite being down two cylinders and a whole lotta horsepower the Raptor is still a truck worthy of your longing attention. And if the Raptor’s 3.5 litre twin turbo V6 doesn’t quite cut the mustard for speed junkies, they will no doubt be waiting impatiently in the wings for the upcoming Raptor R. Rumored to be packing the very same 5.2 litre supercharged V8 from the Mustang GT500, it should send the TRX whimpering into the sunset. The unlikely but incredible fact that we are talking about two trucks packing horsepower north of the seven hundred mark which can lumber to 100km/h in less than four seconds is not lost on us: what a time to be alive.

Before the Raptor R drops, potential purchasers of the gravity defying F-150 will have to make do with the twin turbocharged six pumping out 450 horsepower and 510 pounds feet of torque. Those hoping for dramatic changes to the truck’s drivetrain for the current generation might be disappointed, although they should take a listen to the Raptor at full chat. A trick rerouting and fettling of the exhaust system makes it sound a whole lot better, and in Baja Mode, a whole lot louder. Some likened its auditory signature to the old Infiniti G35, and we think that’s about bang on. Suffice it to say that it is much more pleasing to the ears than the somewhat agricultural sounding exhaust note from the previous generation.

There are some notable upgrades that Ford lavished on the contemporary Raptor which we experienced firsthand with our tester. The first is that the truck now only comes in SuperCrew configuration which was the most popular with buyers anyhow. There is now also a 37” wheel and tire package ($10,000) that those with serious off-road aspirations will want and gives the Raptor’s already formidable abilities off pavement a healthy boost. Making its way from other F-150 models to the Raptor is the addition of a 2.0kW mobile generator in the pickup’s bed and if you find yourself way off the grid- and why wouldn’t you?- power tools of all stripes can be plugged into the truck, perfect for any aspiring Henry David Thoreau’s wanting to embrace the hermit lifestyle by build a secluded cabin in the wilderness.

Our loaded tester had all that stuff, plus the 801A equipment group ($7,850) which at first glance seems steep but considering all the stuff you get it begins to look like a bargain. Notable kit includes a banging Bang and Olufsen sound system, Torsen differentials front and rear and an interior work surface where the gear shifter folds neatly into the console, lending itself as the perfect place to grab a bite or get some work done.

Outfitted as it was, our Raptor boasted a lengthy list of bells and whistles that would make a luxury car green with envy. It would be easier to tell you about the features the truck didn’t have as nearly every single comfort and convenience bauble are here for your enjoyment. It’s all controlled by a large infotainment touchscreen running the latest version of Ford’s SYNC software and it is very intuitively laid out with crisp graphics, icons and menus.

Know what else luxury cars would be jealous of? The way the Raptor goes down the road in serene comfort. It is borderline incomprehensible that a truck this massive and heavy can pull off such a trick- even more so when you consider that this was designed to traverse terrain off-road at speeds that would make other trucks cower in fear. The best way we can describe the experience is to liken the Raptor to the Mercedes Benz S Class, which is a testament to the heroic efforts of Ford engineers to make this as approachable on road as it is in the dirt. It must be experienced to be believed; it really is that good.

Another surprise revealed itself when it came time to fill the truck’s gas tank. As everyone is well aware, these days sticker shock at the pumps has never been greater and this is especially so if you have a high-performance pickup with a huge reservoir that holds 136 litres of go-go juice. We would not go as far as to label the Raptor a fuel sipper, but our observed fuel economy of 16.4L/100km is downright thrifty for a number of reasons- one is the Raptor’s lack of aerodynamics and its immense curb weight, the other is our leaden right feet. This (relative) frugality would make a TRX blush because the only way that truck would enjoy similar consumption figures would be if it were driving downhill with a gale force tailwind with throttle pressure being applied as gingerly as possible. Ford began touting the benefits of its Ecoboost technology almost a decade ago, and in this application, you can really reap its rewards.

We have never wavered from our position that those who buy pickup trucks for commuter duties and errand running are doing it wrong- there are much better solutions out there in getting to work and back and to stock up on groceries. We continue to stand by that view and yet we will admit that if the need for a pickup ever surfaces for us, the Raptor would be a truck we would strongly consider. We are fully aware that there ate other tucks that might be a better fit for our needs, but the Raptor’s all-around awesomeness is too hard to ignore. We were hands down smitten buy it.

And yet we could not help staving off deep seated guilt each time we clambered aboard for journeys long and short of all the capability we weren’t taking advantage of. The incredibly engineered suspension with its massive 3.1” diameter Fox Live Valve adaptive dampers and new coil springs at the rear made for decadent ride quality, even if we were not subjecting them to the type of environment they were designed for. The 3,719 kilogram maximum towing capacity didn’t get put to good use either, nor did we plug any power accessories into the Raptor for an impromptu bush party because we never ventured off the beaten path, mostly due to the lack of an appropriate venue for such antics but also because of our mediocre off-road cred, all factors which acted as a stark reminder of fearing damaging the F-150 Raptor and its price tag north of $100,000.

During the Raptor’s stay with us, it attracted the attention of many friends, family members and strangers- a truck this size wearing Baja 1000 waypoint graphics slathered in Rapid Red Metallic with government mandated marker lights ablaze is kinda hard to miss. We found the unconditional love for this truck is still intact because even those who raised their eyebrows when they learned how much this rig costs slowly nodded in understanding when we pointed out that it rides like an S Class and can tow one in the process; probably while blasting down a rutted off-road single track in the process (Perhaps it’s time we have a chat about that last statement -Ed.)

The widespread love the Raptor currently enjoys is only sure to flourish with the arrival of the supercharged V8 R model that’ll be arriving soon. Until then, inevitable comparisons to the Ram TRX are unavoidable- and a bit unfair, until the R lands at dealerships- but despite the large power/bragging rights deficit, the Ford F-150 Raptor is still top of its game, and it’s the best it has ever been.