The Old Guard should be very, very worried. 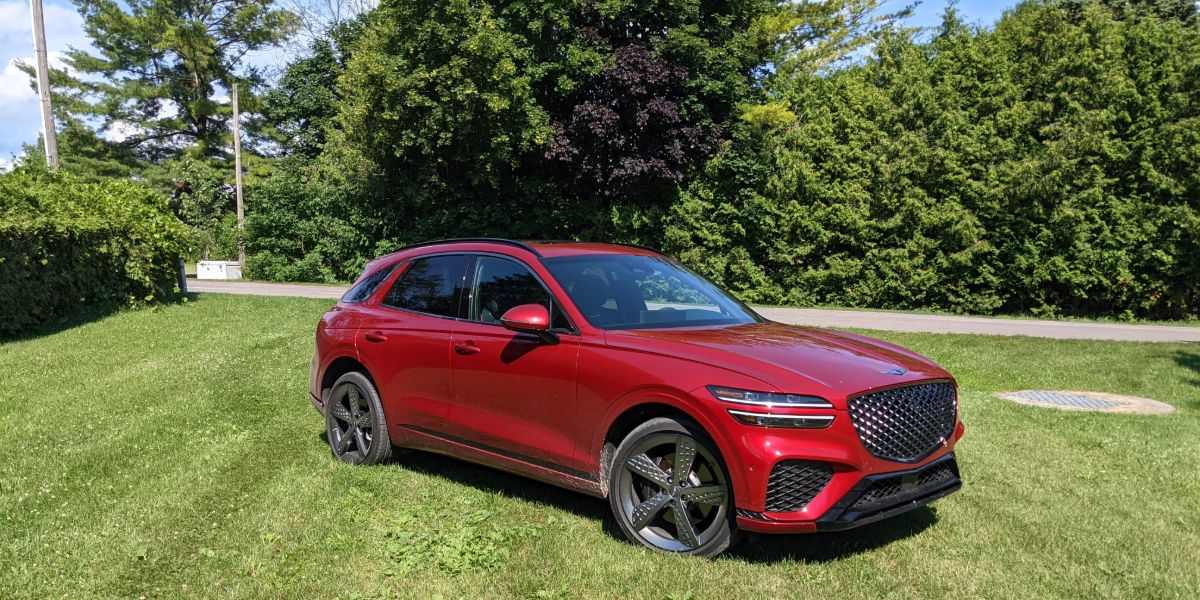 Have we reached the point where beginning a review of a Genesis product along the lines of “you’ve got to hand it to Genesis, they have come a long way in a few short years” has become seriously played out? We think so, and we are choosing not to open with a tired quip about how parent company Hyundai’s meteoric rise from industry laughingstock to chasing the segments best they compete with (or in some cases assuming the role of THE best.) So no, we are not going to head down that well-worn path- we consider ourselves trail blazers here in the Carpages Garage, after all.

The Genesis GV70 you see here is not exactly what you’d call trail blazing on the surface, but it is rather excellent, and it is the first of its kind within the Genesis portfolio. As the momentum of success continues to build for this nascent luxury brand, the top brass knew that it was high time for an SUV from the brand like, yesterday. And so they unleashed the GV80 onto the world, and the world responded very positively. And why not? Here is an SUV that people would often mistake for a better-looking version of the Bentley Bentayga that nailed the luxury SUV trinity right out of the gate- exquisite styling inside and out, spoiling occupants with every conceivable bell and whistle combined with enough power to keep things interesting and allow for the effortless type of motoring buyers expect. That car has been an unmitigated home run, but there are other hotly competitive segments where the Genesis folks recognized an opportunity to be a disruptor. They set a bull’s eye on the luxury SUV sandbox where the likes of Mercedes Benz GLC, BMW X3 and Audi Q5 are known to play. Perhaps, if you follow the template of repeated triumphs for each car Genesis builds, it is not at all surprising that they accurately hit their target convincingly with the GV70. Genesis says this is the most important car they have built thus far in a portfolio of cars that are all in their own way crucial to the brand’s enduring success.

Walk up the GV70 and you cannot deny it’s a handsome thing. Anyone else getting a Porsche Macan vibe from its side and rear profile? The new Genesis design language fits the GV70 very well, and the 21” wheels, huge exhaust outlets and purposeful stance are all icing on a very promising cake. We could do without the black plastic mesh treatment on the lower rear facia, but it isn’t off putting enough to thumb our noses at. We are especially fond of the LED front and rear lighting elements and the way they integrated the third brake light neatly into the rear spoiler. The C pillar’s rear window is quietly beautiful to behold as well.

Inside, the GV70 is equally lovely- maybe even more so. Yes, it has every single luxury feature you can imagine and we could craft another post just running down the impressive list of kit that comes with this rig in Sport Plus trim, but highlights include radar based rear occupant detection, the ability to drive and park itself without any intervention from the driver (yes, Teslarati, better than what your cars can manage) and the world’s first application of a fingerprint reader used to start the car and eventually authenticate your financial details to make purchases and to keep all your favoured settings intact each time you set off, very helpful for situations with multiple drivers. Impressive stuff indeed, but we were more enamoured with the everyday bits of tech that make the GV70 such a joy to live with. We should probably start off talking about the displays, because the digital instrument panel and infotainment screen have razor sharp graphics and intuitive menus which suffer from zero lag when you execute a command. It’s telling that established luxury marques are likely going to look to Genesis as a benchmark and reverse engineer their systems to make the ones they have perform nearly as well. They might want to tinker with the standard Lexicon sound system too, because it outperforms so many of the up-level stereos we are used to seeing in the competition- it even manages the rare feat of making Sirius XM sound good. We love the seats, which are sporty enough to hold you in place when the going gets frisky but are comfortable enough for long, fatigue free stints in the saddle. What made the biggest impact on us was the fit and finish of the interior overall. The stitching along the dashboard, the quilted leather, the ellipsoidal design theme that ties everything together and carbon fibre trim that can only be described as exquisite are easily a cut above what you get in say, an Audi Q5, and its own interior isn’t exactly what you’d call slumming it. Those looking for demerits will have to dig deep, like taking issue with the slight glare coming off the Heads Up Display receptacle in direct sunlight or pointing out the smallish learning curve each driver endures when mistaking the infotainment scroll wheel for the transmission. Yes, these were the only major issues that we noted while the GV70 was under our care.

To recap, our Mauna Red GV70 looked great inside and out, but nifty styling and a cool interior only get you so far around these parts, because we are drivers and if a car doesn’t feel at home on trips short and long, fun or routine than we usually begin to lose interest fast. Since the GV70 shares a platform with the G70 sports sedan which left us properly impressed when we drove it a few years ago, we knew the fundamentals would be solid- but how would things turn out when scaling up from sedan to SUV? The GV70 is not as sharp a cornering scalpel as its sedan cousin- how could it with increased centre of gravity and heavier curb weight – but it still acquits itself exceptionally well in any situation we could throw at it. It manages to pull of the duality of serene, cosseting cruiser and playful backroad rascal that so many others attempt but ultimately fail at. The suspension seems to carpet the road you are on so large bumps are more heard than felt and the GV70 never threatens to degrade into squishiness when you push it. The brakes are stout and easy to modulate and the pull of the 3.5 twin turbo V6 is relentless. If the piped in audio snarl seems too uncouth for you, you may turn it down through the copious settings available. It may begin to sound like the GV70 is close to achieving the holy grail of Perfect Car- it does come tantalizingly close to doing so. Only the hood fluttering at highway speeds and the slightly gruff stop/start system are cause for complaint (you see what we meant by having to dig hard to come up with tuff to bemoan?)

At $75,500 the GV70 is not cheap until you consider that should you like to spec out any one of its competition in similar spec as out Sport Plus tester, you will be paying thousands of dollars more; it provides exceptional value for the money. You also miss out on the white glove ownership experience of owning a Genesis, like never having to step foot in a dealership because they’ll send someone to your home or office to pick up your car and drop it off once all work is complete. The part that most impresses us is the fundamental excellence the GV70 offers right out of the gate in its first year on sale. The old guards- who should be very worried, as we said in the byline- have had years to tinker and refine their own offerings and have been soundly eclipsed by the upstart rookie. We think the Genesis brand has some very sunny days ahead to look forward to if they continue the sparkling trajectory they’re currently on. Which makes us wonder: what would a bonafide sports car look like if they decide to make one?