The Duramax’s charms do not start and end with its measured imbibing of diesel fuel. It is also one of the better diesel engines we have experienced because of its smoothness and overall refinement. 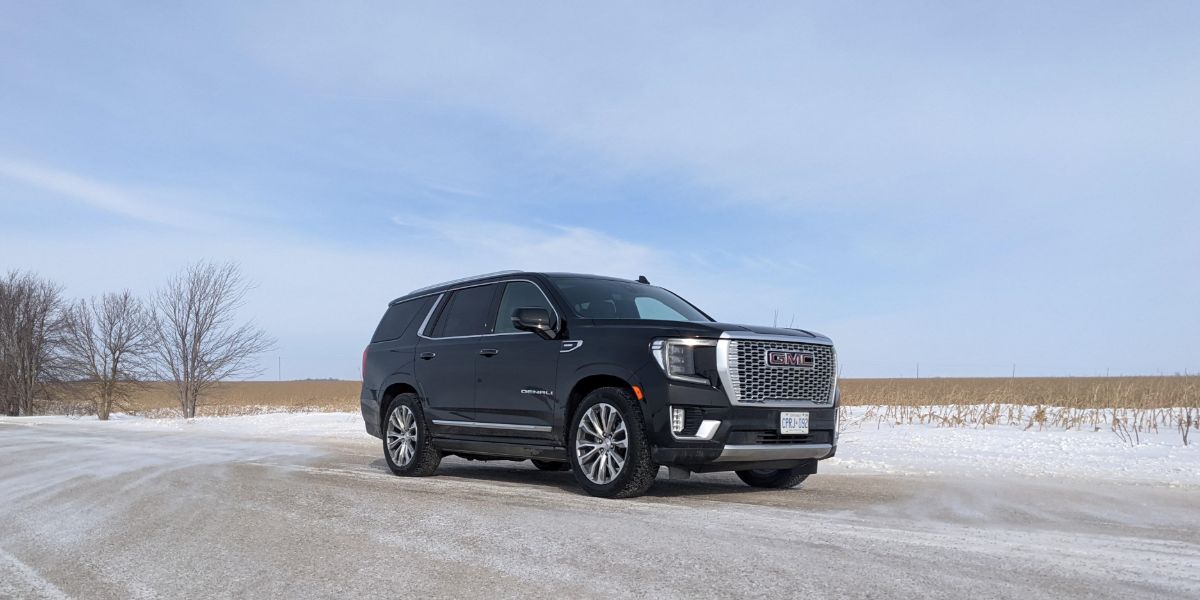 When your Editor-in-Chief calls you at home- late on a weeknight, no less- you had better believe it’s important.
“There must be some mistake,” they began. “When you posted the Yukon Denali review, you have the Observed Fuel Economy listed as 10.2L/100km. That can’t be right.”

Except it is right. Ol’ Ed was not out of line to think that maybe we confused the Yukon’s fuel consumption with a vastly smaller crossover, or even a compact sedan. Sure enough, however, the figure we submitted prior to publishing does reflect the amount of diesel fuel our Denali trimmed tester sipped over the course of the week under our judicious right foot. It will no doubt send shockwaves through the cores of various full-size SUV owners, especially so of fellow Yukon drivers with V8 gasoline engines under the hood.

That utterly sparkling frugality would not have been possible with one of General Motors excellent but thirsty gasoline V8 engines toiling away under the hood. Even on a good day, under the most ideal conditions, even while driving slightly downhill with a brisk tailwind- the gas swillers could not manage to come close.

Our interest was piqued back when we heard that the Duramax diesel GM employs in their pickups would make their way into the engine bays of the brand’s full size SUV models like the luxurious Yukon Denali you see here. It may seem a tad underwhelming on paper; 277 horsepower seems a bit limp wristed for a vehicle of the Yukon’s considerable size and weight, but it is the 460 pounds feet of torque that is the more compelling of the two metrics. That figure matches the burly 6.2 litre V8, but all that grunt is available just a tick off idle lending a waftability that would be elusive even with the 6.2’s brawn. The timing of this Road Test Review is also interesting because as of this writing, regular grade go-go juice is fetching $1.70 per litre with diesel commanding a few cents more. When you have a tank that holds 106 litres worth of fuel, sticker shock at the pump becomes very real. This made us wonder: as great as the gas engines are, why would you not spec the diesel based on stingy thirst alone, let alone its other attributes?

Over the course of our week with the top-drawer Yukon, we put on just over 700 kilometres of mixed driving with a couple of longer distance highway slogs thrown into the mix and we were still able to achieve that almost unbelievable consumption figure of 10.2/100km.

The Duramax’s charms do not start and end with its measured imbibing of diesel fuel. It is also one of the better diesel engines we have experienced because of its smoothness and overall refinement. It is so good at distancing itself from the ills of diesel powerplants from yesteryear that Cadillac saw fit to make it an option on the current Escalade. When you start it up, there is no mistaking the soundtrack for anything but a diesel. Yet driving around town and on the highway, that noise fades quietly into the background. Even when you give it the beans, the Duramax makes a pleasing sound as it charges towards its 5,000 rpm redline. There’s not much point to chasing those kinds of engine speeds as the 3.0 inline six compression ignition mill is much happier operating near the lower sector of the tachometer. Another Duramax asset is its chilly weather performance. Diesels become notoriously agitated when they are asked to fire up after soaking in frigid temperatures overnight, settling into a lumpy, clattery idle while belching out more smoke than a chimney. Not so with the Duramax. This peach pauses for a few short seconds to warm its glow plugs and then turns over just as innocuously as it would in warmer temperatures.

The diesel’s relaxed demeanor pairs nicely with the driving experience. The effortless power means that things are very relaxed, which is good because hustling this brute past its comfort zone is an exercise in futility. Our tester was equipped with air suspension, and it did a commendable job of taking the edge off tarmac gnarled by winter’s frigid grip, but the fully independent suspension also deserves credit for delivering handling and ride quality that is light years better than the old rigid axle setup. Steering is light but path accuracy is well judged which is a good thing in keeping the Yukon neatly on its intended path. You could say that the Yukon drives just like a GMC Sierra pickup, and you would be bang on correct since our luxobarge is basically one of those with a longer roof and space for more passengers. Since pickups offer an impressive degree of refinement these days that is by no means damning with faint praise.

Despite its roots as a pickup workhorse, the Yukon Denali boasts a cabin that is on par with the ritziest luxury SUVs on sale today. The best thing about the Denali’s cockpit is something you will not find listed on its spec sheet, and that is the luxury only abundant spaciousness can provide. No matter where you sit or how big you are, comfort is the name of the game here. If you are the type who relishes far flung road trips with friends and family, you would be hard pressed to find fault with the confines of this glittery GMC. We were quite pleased with the excellent stereo and logical infotainment system, and here’s another plus you won’t find listed on the munroney- the way the heated seats and steering wheel get toasty very quickly and the considerable power of the front and rear defoggers make for excellent companions during the winter months. The Heads-Up Display is remarkable for being one of the better realizations of that technology we have encountered. When the weather gets warmer, a massive panoramic sunroof will let you enjoy the sights and smells of the area you happen to be exploring.

There are a few miscues that we noticed while at the helm. A few whiffs of cost cutting measures are present and none is more obvious than the phoned-in open poor wood trim that is not going to fool anyone, nor will the questionable choice of leather quality that covers the dashboard. While we appreciate the space freed up on the console thanks to the push/pull switches needed to operate the transmission, we never quite got used to them, especially so when making three-point turns. And you’ll have to perform such manoeuvres regularly when navigating tight parking spaces and while negotiating  the confines of city driving because this baby is BIG. It is a far cry from anything you’d call wieldy and all the cameras at your disposal prove to be indispensable- smaller humans are virtually eclipsed by the Yukon’s massive footprint from the driver’s seat. Then there is the price point which is right in line with what this segment demands, but we couldn’t help but wonder if a very nicely equipped Chevy Tahoe is a more fiscally pragmatic choice given that it costs less and isn’t exactly a penalty box even when compared to the full zoot Denali like our tester.

There are other interesting choices to consider when shopping in the realm of the Yukon Denali, but if you require a vehicle that can hold your entire family and their gear in luxurious comfort while towing your boat around this just might be exactly what you need- just remember to spec that wonderful Duramax diesel.