We’re grateful that Honda has committed to bringing it back for another generation and given the inherent excellence of the 11th generation Civics’ bones are, it should be even better the next time around. 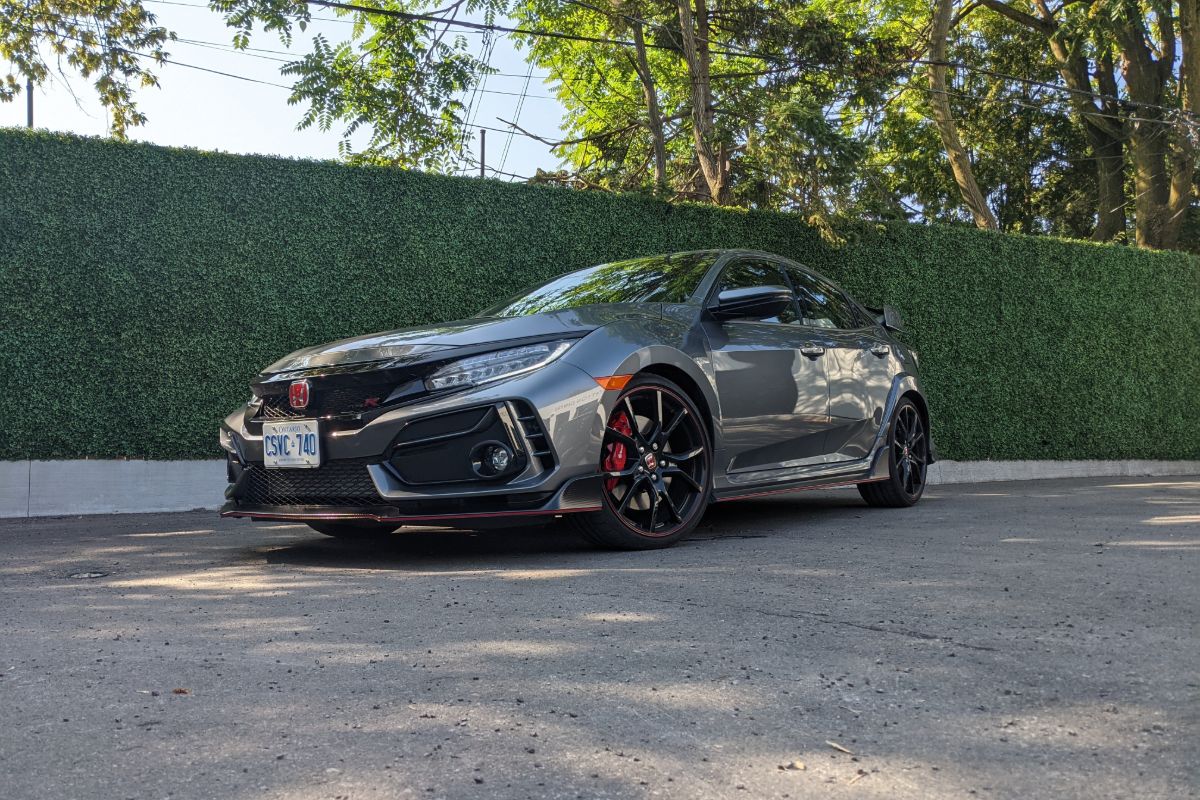 It’s been five years since the Honda Civic Type R debuted to an unsuspecting- but gleefully awestruck- enthusiast community.

We say enthusiast because this firecracker is not going to be on the radar of your typical Honda Civic customer. Those folks are looking for exemplary fuel economy, a quiet, unassuming ride and all the latest technology and features. The Type R similarly offers surprising fuel milage, ride quality that is way better than you might expect and packs most of the creature comforts one looks for in a compact sedan, but it is not your average Civic. It is a much more raw and visceral experience than you get from the version at the other end of the showroom. Coming exclusively with a manual gearbox, it reliably gets a Hard Pass from the typical Civic shopper.

That suits us (and garden variety Civic shoppers) just fine. Prior to first turning a wheel in Honda’s mini-supercar back when it debuted, we were hopeful that the Type R would be fun to drive, a decent effort to fill the void left by such iconic cars like the S2000 and Acura’s own Integra Type R. Keeping the front-wheel drive layout and installing a turbocharged 4-cylinder engine instead of a revs-to-the-stars naturally aspirated mill wasn’t the start we had hoped for and it caused more than a few eyebrows to arch in doubt. Could this thing actually be good, everyone wondered? As it turned out, the answer is an emphatic “yes”.

So we were puzzled when we heard that Honda was tinkering with the recipe that makes the Type R such an incredible car, front-wheel drive or otherwise. What could they possibly do to make this better that hasn’t already been done? One of the things we love about Honda is how they relentlessly chase perfection through minute details, and this is a classic case of such an obsession for the brand. We immediately decided that another go-around in Honda’s junior sports car was to see if the fettling actually made a difference to the car overall or if the tweaks were simply employed so the marketing team could draft a bubbling press release with the intention of stoking the interest of Honda fanboys and gals while maybe netting a few more buyers in the process. After a week in our Polished Metal Metallic tester, we can confirm it is the former.

“The brake feel could be better”, said no one, ever, about the first version of the FK8 generation you see before you. Apparently Honda never got the memo. So they binned the old brakes for two-piece units up front, which offers even better stopping power and eliminates 1.5 centimetres of useless pedal travel. Um, OK. Then they looked to the aluminum ball shift knob and after a few choice tsk-tsks they decided that a teardrop shape would work better, and inside the shift knob would have small counterweights to help the driver better navigate the gear lever into its gates. They also toyed with the adaptive dampers to make them more reactive and opened the front grille opening 13% for better cooling on track days. All these incremental upgrades do not make for a change that you can obviously feel if you were to drive the pre and post facelifted models back-to-back. What you would be able to tell from your butt dyno is the holistic effect of all these modifications is that this car remains an unbridled hoot to drive.

After you’ve settled into the cockpit and set off, it takes but mere meters for the specialness of the Type R to reveal itself. And after a few minutes, you find yourself scratching your head wondering “how’d they do that?” The first thing you notice is the ride quality. Anything with such clear sporting bent and shod on 30-series performance tires- basically a rubber band encircling the 20” wheels- has no business riding with such suppleness. Even in full red mist Type R Drive Mode, the ride is decidedly firm but never feels harsh. This is without any fancy magnetorheological shocks or air suspension, folks. After a few more minutes you discover that there’s a surprising amount of refinement to be enjoyed, so much so that you want to use the car every day, for any purpose needed. With generous room for rear passengers and a fairly commodious hatch out back, it’s even practical. But the biggest surprise of all is how Honda managed to make a front-wheel drive platform so gosh darn good to drive. There is no torque steer, no unbecoming moments of trying to channel all that power to the tarmac. It is, without a doubt, the best handling front-wheel drive car you can by, full stop. Or you may lay this heaping compliment at the Type R’s feet, as we often do- if Porsche built a front-wheel drive sports car, it would feel a lot like this.

As we delve into the driving experience, let us circle back to the subject of the Type R’s manual gearbox. Maybe you can feel those counterweights we mentioned earlier enhancing shift quality- we couldn’t detect anything. It doesn’t matter if your hands are finely calibrated or not, it is universally accepted that this transmission is amongst the best you can manipulate in any contemporary automobile. It’s notchy but smooth; it’s slick but precise. It’s so rewarding to use, no matter if you’re simply commuting or on a hot lap, or any given situation including stop-and-go traffic. The perfectly judged clutch and that fawned over shifter make for as pleasurable as a slog through stubborn gridlock can be.

Look at us, going on and on about the gearbox without touching on the engine, suspension and brakes! Maybe it’s because the imminent demise of the DIY transmission is nigh, and we feel nostalgia already setting in. Whatever the case, all three pillars of driving dynamics are exceptional, keeping in line with the rest of the car. We already told you that the brakes and suspension have been tweaked to offer incremental gains in handling and stopping power. Our judgment is that they were pretty terrific to begin with, but we’ll never say no to Honda eking out a few more grains of perfection when changing gears and slowing down. The engine has been left alone but that’s OK- it’s 306 horsepower make it plenty fast enough, and efficiency isn’t compromised- we managed a truly spectacular 10.5L/100km over our week in the Type R which is made even more eye opening when you consider how much time the tachometer spent near the upper limits of its travel.

Like the engine, the interior has been left alone and we’re OK with that. Maybe they could make it a little less red throughout, and maybe they could upgrade the infotainment system. With the 2022 version waiting in the wings, we have no doubt that the new Civic platform on which rides on- complete with its vastly improved interior and infotainment- will only add to the Civic Type R’s charms.

The only gripes we uncovered while chucking the scrappy Type R around were pretty much in line with what we kvetched about the first few times we drove it. That infotainment system should really be sacked in favor of a reskinned version of the unit we just sampled in the 2022 Civic Touring; the difference between the two can be compared the gulf that exists between CD’s and cassettes. Speaking of sound, the engine lacks the manic high rpm buzzsaw shriek of yesteryear- because turbocharging- but it sounds good enough to us, except maybe on long highway trips. With the engine spinning at a somewhat busy 3,200 rpm, it drones on and on in a way that had us reaching for the volume knob on the stereo that they resurrected some years ago. Now if Honda can only tone down the ‘energetic’ exterior styling motif- which according to spy shots circulating online, the new Type R looks to be blessedly more restrained- we’ll fall even harder from the crown jewel of the Civic lineup.

After returning the Type R to Honda headquarters, we locked the doors and walked (trudged?) to the reception area, we found ourselves wondering: how much longer do we have to enjoy special cars like this? Certainly, manual gearboxes are going to be extinct in a few short years, and internal combustion engines can’t be far behind. Sure, this car would be a gas (pun intended) to drive with a battery pack and electric motors, but it will not be the same. We’re grateful that Honda has committed to bringing it back for another generation and given the inherent excellence of the 11th generation Civics’ bones are, it should be even better the next time around. Do you find yourself toying with the idea of a Civic Type R becoming the pride of your fleet? Act fast folks- these FK8 gems are not going to be around for too much longer.