The 2022 Honda Civic Touring – They Did Not Screw It Up

After spending a week in a brand new 2022 Honda Civic Touring, we can confidently tell you that they did not screw it up. Quite the contrary actually; the new Civic is a home run. 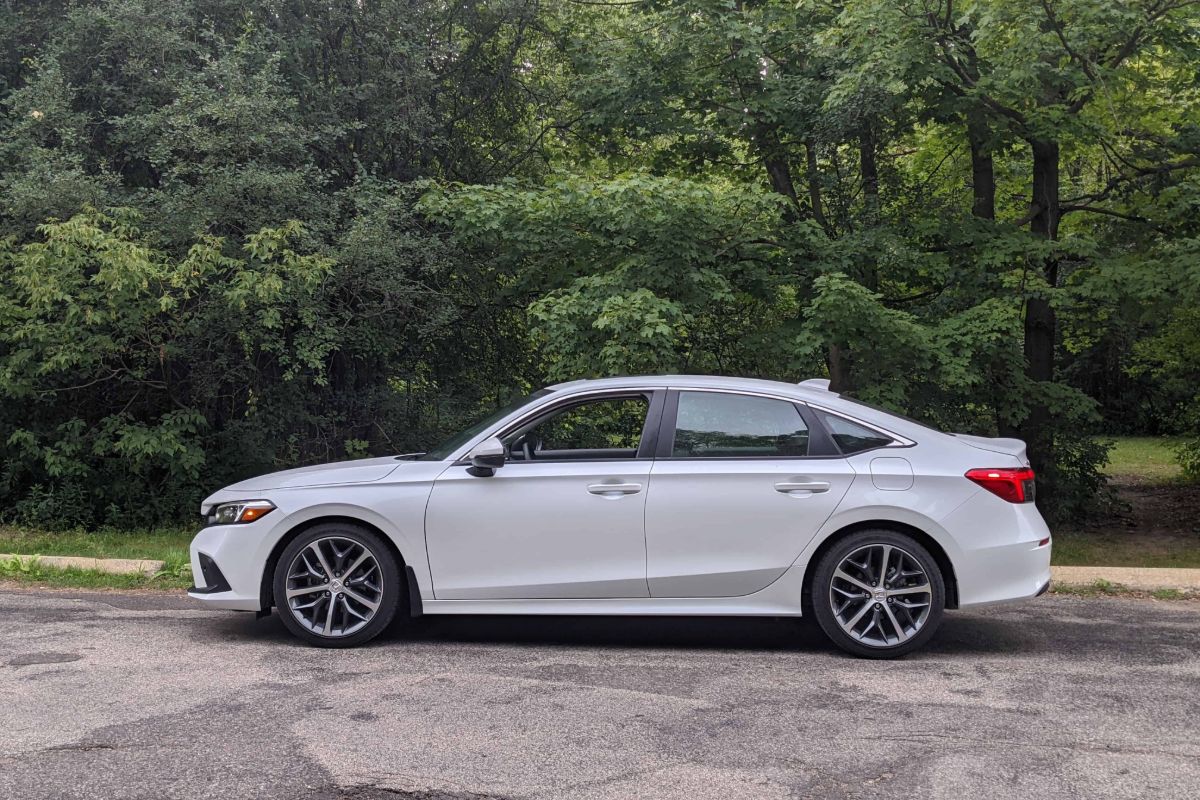 Can you imagine the pressure?

The engineers and designers tasked with coming up with a clean sheet redesign of an immensely popular or iconic car must have a plethora of antacid medication strewn about their desks. It doesn’t matter if the subject in question is a Porsche 911, a Ford F150, or a Jeep Wrangler. The prevailing mandate is always the same: Don’t. Screw. It. Up. Pass the TUMS, would ya?

So it’s likely that the team responsible for bringing a wholesale redux of the 11th generation Honda Civic sat around a board room table with knotted stomachs and sweaty palms when the top brass burdened them with just such a mission. Honda knows where its bread is buttered, and the Civic is one heck of a  piece of toast. It has been a critical part of the brand’s success since 1972, and here in Canada, it is often at or near the top of the most popular car on sale. Get it right, and breathe a sigh of relief. Get it wrong, and, well, say sayonara to your job, not to mention the unthinkable damage to the brand itself that would inevitably follow.

After spending a week in a brand new 2022 Honda Civic Touring, we can confidently tell you that they did not screw it up. Quite the contrary actually; the new Civic is a home run.

It follows in the footsteps of the 10th generation which was warmly received by auto scribes and customers alike. If there were any major complaints about that one, they would be aimed squarely at the, um, unfortunate styling. All ate up with fake vents, sharp creases, and scythes, the outgoing model was great to drive but not exactly easy on the eyes. As you can see, this glaring issue has been tidily fixed and now you might even use the words “handsome” and “Civic” in the same sentence. We heard some folks describe it as a ‘baby Accord’, and we’re OK with that.

It’s the same story when you settle into the Civic’s cockpit. This was not a mailed in rethink here, lasies and gentleman. It came as a slight shock to us when we considered our surroundings because the Civic feels very mature and it is easily the most luxurious version of the car ever built. Everything is perfectly laid out- Honda’s engineers weren’t messing around. We particularly liked the mesh lattice work that spans the dashboard, and the Mazda3-esque simplicity of the climate controls. Why can’t all cars follow this simple, uncluttered approach? If you need proof that Honda listens to its customers, look no further than the decision to eschew an overly complicated interface and the continued reinstatement of the volume knob that went missing a few years ago only to resurface to the shouts of joy coming from every Civic owner around. Another win for Civic drivers: the infotainment system, long a weak spot for Hondas, is now truly excellent. It responds quickly to commands and is easy to navigate- now we just need this newest version to make its way throughout the entire lineup (and maybe even Acura too, because that mousepad interface drives us nuts.)

While we would vastly prefer analogue gauges to digital- hey, there’s a reason they’ve been employed for one hundred years because they work perfectly well- the digital instrument panel in the Civic is pretty darn good. It seems small compared to the acres of screen proliferating the industry, but it lays out all required information cleanly and legibly and it doesn’t wash out in direct sunlight. Another pioneering bit of kit was the Bose stereo, a first for a Civic. We aren’t expecting audiophile levels of sound reproduction in a compact sedan, but our ears were surprised at the rich and full sound coming out of the Honda’s speakers. While that might be a stunner, Honda’s typical packaging brilliance is not. There’s ample room for all passengers so the little Civic feels much bigger than it is, and there are a glut of nooks and crannies to stow all kinds of stuff.

It’s the same story when it comes to the way the Civic carries itself on the road. Happily, the old model was accomplished in terms of driving dynamics and this one picks up right where its predecessor left off. The engine and transmission are carryovers although the 1.5 litre 4-cylinder turbo in our tester did benefit from a bump in horsepower and torque, now making a competitive 180 horsepower and 177 foot pounds of torque. Getting that power to the front wheels is a CVT transmission that seems to have benefited from a polish by Honda’s engineering team to the point where the annoying rubber band power delivery and insipid droning have all but been eliminated. For those times when you need to get up to speed quickly, there’s ample power to help you merge or make a pass slower traffic. There are paddle shifters on the steering wheel that will allow you to pick your way throughout virtual gear ratios, but we didn’t really bother with them much because they don’t have the crisp response we were hoping for. Patrons of this segment aren’t expecting blistering performance but instead prioritize excellent fuel economy, and the drivetrain delivers on that promise. Even under our heavy left feet, the Civic returned a frugal 7.2L/100km. Our logbook entries had one common theme, after praising its efficiency: anyone who spent time in the Civic remarked on how hushed and refined it is.

If your commute finds you on roads that have curves- lucky you!- the Civic rises to the occasion and shows its driver that it comes from good genetics in the ride and handling department. Steering is light and accurate and body motions are clipped without ever feeling harsh. When it’s time to throw out the anchors, it stops obediently and without drama, providing a good pedal feel no matter the amount of braking force the driver summons. It took a week spent driving the Civic over all manner of roads and highways, but there’s a quiet sense of brilliance that eventually reveals itself, and it imparts a feeling of a car that is better than it needs to be. That’s a good thing, because Honda has promised that hotter versions based on the car we drove are on the way ranging from the spicy Si to the Ghost Pepper hot Type R. The fundamentals and balance are solid and remind us that Honda can still tune a chassis to perfection when the chips are down. If the ubiquitous Touring trimmed version we drove feels this good, we can’t wait to see what’s in store when the sportier models make their debut.

Overall, there isn’t much to complain about, which is a testament to Honda’s efforts of bringing this new generation to life. The CVT could use just a little more elbow grease in its low-speed driving behaviour and the paddles could be a little more alert when you want to play. We wish that the engine sounded more inspiring when you give it the beans, but this isn’t something most Civic customers will even notice, much less care about. We only bring this up because the old B and K series engines that used to do duty under the hoods of Civics sounded so darn great.

Our takeaway here is that Honda has something to be proud of in their all-important Civic.  The men and women toiling away in Alliston, Ontario factory have been entrusted with building a car that will carry on the Civic legacy, even improving on it. We must commend Honda for not giving up on the compact sedan as so many other manufactures have in favor of pint-sized crossovers. It took a few generations, but the Civic is back to the point of holding court amongst the segment’s best. The engineers, designers, and product planners should breathe a collective sigh of relief because they delivered on perhaps the most important mandate: they didn’t screw it up - far from it.