For those who do relish the symphony of intake and exhaust noise and the connection between driver and machine that you can only get with internal combustion, the time is nigh to lock in your fix before it’s too late. 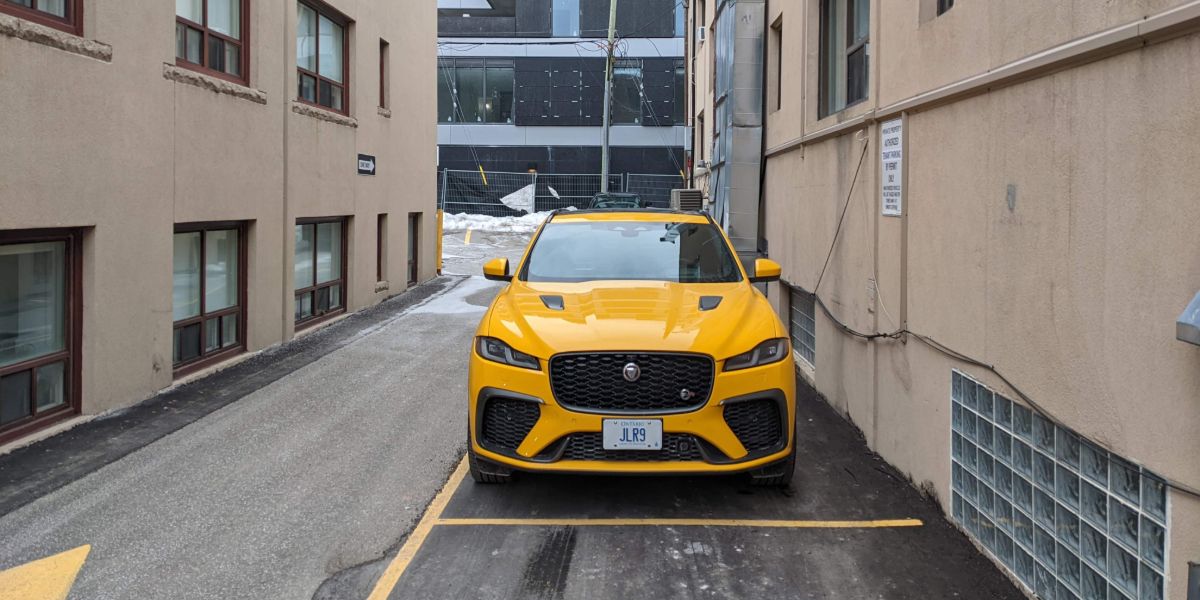 Automotive manufacturers adore issuing press releases, and lately we keep hearing through these communications that yet another brand is trumpeting the New Era of electrifying their lineups. Predictably they all read the same, and they all maintain that this transition will be done before the end of the decade (or slightly longer, but we digress.) Not to be left out, Jaguar followed suit by issuing notice that this change is afoot for their lineup- although in this case, the time frame is vastly shorter, claiming to be free of pistons and connecting rods by 2025. With just three short years before we say so long to gasoline drinking Jags for good, the SVR is a sort of farewell party, a means to go out with a bang. It is the ultimate expression of F Pace, the answer to the question of “what would happen if we shoehorned our most powerful V8 into the engine bay before we bring on the battery packs?”

As if the steroidal powerplant weren’t enough, get a load of our tester in the gallery below. Slathered in searing Sorrento Yellow paint (a $6,100 option, but hey, YOLO, right?) complemented by massive 22” black wheels with equally huge braking hardware and glossy red calipers peaking out from behind make this hot rod SUV one cool customer. So much for quiet British luxury- this baby doesn’t whisper, it screams. The kids appropriately dubbed our SVR ‘The Fast Banana.’

You will find it hard to argue with that nickname because when you open the taps of the supercharged 5.0 V8 the SVR gets out of the hole like a scalded kitty, snapping off shifts from the 8-speed automatic gearbox and making one helluva noise while doing so. 550 horsepower and 516-pound feet of torque make for a 0-100km/h sprint in the low four second range giving this Jag a fearsome turn of speed. You’ll want to drive it exclusively in Dynamic Mode which automatically engages Loud Mode for the exhaust. It seems a little flat footed in any of its other drive mode settings, but properly sharp when you see the little checkered flag in the digital instrument panel confirming you want your F Pace in its most aggressive manner. This became our de facto default mode, and we think it should be for most SVR owners too.

The hottest F Pace isn’t just about blistering acceleration from rest- the way it responds to your right foot on the highway is pretty amazing too. Provided you have the SVR in Dynamic Mode (again, because why wouldn’t you?) a mere twitch of your shoe on the throttle begets a wonderfully angry reaction. The transmission quickly jumps down a couple of gears, the engine spins in its sweet spot for optimal power delivery, and BAM!, your fellow motorists dawdling about become a dot in the review mirror left behind in a wake of sonic fury. When it comes time to reign things in to a less manic pace, the robustly sized braking hardware is very effective at scrubbing off speed which makes for a worthy foil to the fierce acceleration called up by the supercharged V8. The SVR gleefully makes short work of your favourite backroad with suspension that grips the tarmac tenaciously yet not at the expense of ride comfort- it is very firm but never harsh. Part of the credit for the Jag’s zest for corners goes to the relatively light curb weight of only 2,133 kilos which makes it more svelte than many other fast SUVs it competes with. One more note about the SVR’s driving experience is the outstanding LED lighting Jaguar specifies for F Pace duty. On a dark rural road at night where ambient light is swallowed up by inky darkness the low beams cut a nice arc to light the way, and when we engaged the automatic high beams, the visibility was truly next level. Those that live in areas with spotty streetlighting will find this to be a huge safety enhancing asset.

If you allow us to continue discussing the F Pace SVR’s assets, we should start by gushing over the interior. It is, in a word, exquisite. The quality of assembly and attention to detail is beyond reproach, and we want to personally shake the hands of the ladies and gentlemen who designed it and resisted the urge to use smudge magnet piano black appliques or turn to cheap wood or aluminum trim bits. It is simple and not overdone in a way that many of its competitors are not. We admit to sizing up the very cool looking racing inspired bucket seats warily, wondering if we were in for a week of sore backs and numb keisters. While they may look hardcore and do an admirable job of keeping you in place when you sashay down a squiggly road, they are all day comfortable and expertly tread the line between sport and comfort even after many hours in the saddle. Dispelling the myth that lightening does not strike in the same place twice, we found the Pivi Pro infotainment system to be the very same version as the one we sampled in a Land Rover Defender 110 recently, which is to say that it is head and shoulders above anything previously offered by the two companies. Where the switchgear is concerned it took a little while to get used to their operation, but we ultimately found the push/pull interface for climate control and seat heating to be very clever. We also muttered a heartfelt thank you to the existence of the conventional gear selector which is so much better than the old rotary shifter as to defy description. Clearly, those who oversee the F Pace interior program are quick to learn from their mistakes in the past.

That’s not to say that the F Pace is free of any criticism from our eagle-eyed Road Test warriors, although it remained mostly immune to our gripes now that the dreadful rotary shifter and half-witted infotainment systems have been put out to pasture. The haptic buttons on the steering wheel did not endear themselves to us whatsoever- there were times during frigid commutes where we would need to press the heated steering wheel button several times before it got the message that our hands desperately needed thawing out. Our only other complaint will seem highly pedantic to most, and it concerns the volume from beautiful quad exhaust pipes. It isn’t that they are too loud, but not loud enough. The last time we experienced Jag’s supercharged 5.0 V8 was in the engine bay of an F Type SVR sports car, and it packed a positively belligerent soundtrack with angry pops and burbles when you’d jump out of the throttle. The F Pace is still loud enough that your neighbours will hear you coming and going but tame enough that they won’t politely ask you to park your F Pace somewhere a few blocks away. We can appreciate Jaguar’s decision to tone things down somewhat but since we tend to act our shoe size and not our actual age, we missed the extra decibels.

For those who do relish the symphony of intake and exhaust noise and the connection between driver and machine that you can only get with internal combustion, the time is nigh to lock in your fix before it’s too late. Jag’s three-year timeline of replacing engine blocks with electric motors is fast approaching, and the F Pace SVR is proof that Jaguar refuses to go quietly into the night rendered in metal, glass, and rubber.