Worried that the other passengers might come down with a nagging sense of FOMO from the lucky person who snagged shotgun? Don’t fret. Everyone on board is in for a treat. 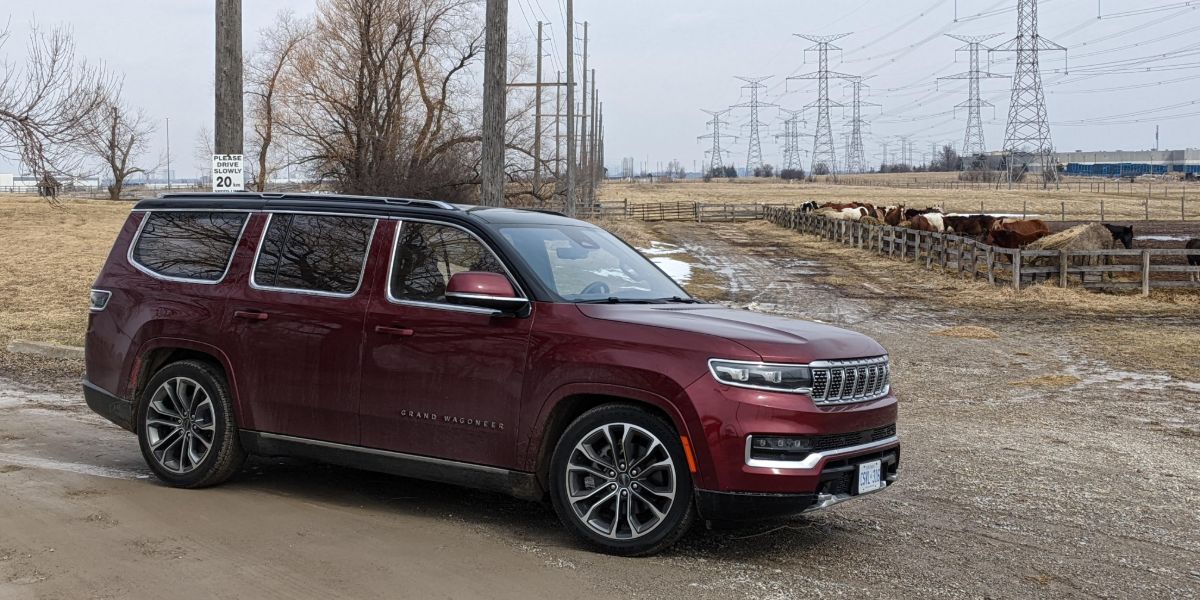 Back in 1991, Grandma needed a new car. Her then-current ride (a 1985 Cadillac Seville- Grandma liked the finer things in life back then, a tradition that continues today) was starting to get long in the tooth and since she was spending more time at her cottage, she mandated that her next vehicle wouldn’t be a car at all but rather an SUV, or as we called them at the time, “trucks.” It needed to be tough enough to handle the worst rural Ontario could throw at her and Gramps while featuring four-wheel drive to ensure their safe passage through the deepest of snow falls. With buying criteria rendered in crystal clarity, she bought a Jeep Wagoneer.

The Jeep dutifully fulfilled its transportation requirements many years, and its rugged nature, leather trimmed cabin and faux wood appliques adorning its sides were seen as endearing qualities that our family grew to love. The 5.9 litre V8’s insatiable thirst for gasoline and very questionable overall assembly quality were not regarding with the same fondness, however. In the summer of ’91, the last one rolled off the assembly line in Toledo for good and Grandma reluctantly sold hers a few years after when rust began to slowly claim her beloved Jeep.

While Grandma’s Wagoneer remains a mostly fond set of memories, 30 years later we find history repeating itself as we find ourselves behind the wheel of another Jeep Wagoneer, although this time around it has a ‘Grand’ prefix in its name. Much has changed although in concept these trucks are cut from the same cloth. That said, three decades of technological enhancements have increased the difference between these two to a gaping chasm. The 2022 Jeep Grand Wagoneer Series III as our tester is officially known still has a penchant for chugging go-go juice and making short work of inclement driving conditions but that’s about the only similarities that remain.

Hedonistically luxurious three row SUVs are having a moment these days and Jeep could not bear to sit on the sidelines any longer, watching as competitors gorged themselves at the buffet of juicy profit margins. Since parent company Stellantis has the Ram pickup in their portfolio of offerings, they followed a tried-and-true trail blazed by fellow American brands Ford and GM- take the humble underpinnings of a pickup truck, install a powerful engine, provide seating for seven and independent rear suspension and then proceed to cram in an exhaustive amount of luxury and tech features. It isn’t a terribly innovative template but it is one that will undoubtedly pay dividends.

You’d be hard pressed to think otherwise when you clamber aboard the good ship Grand Wagoneer. Notice that we did not include ‘Jeep’ in there- that is because Stellantis is positioning these rigs as a sub brand extension of the Jeep product lineup- witness the fact that the only place you’ll see Jeep branding is on the start-up screen of the infotainment system when you fire it up. It is likely you might overlook the absence of badging anyhow because you’ll be too captivated by the Grand Wagoneer’s utterly sumptuous environs.

The often employed trope of ‘American luxury’ is by no means new and while there is no clear definition of what that actually means, the Grand Wagoneer’s cabin seems a tangible manifestation of that. It manages to appear opulent but stops short of coming off as overwrought or that it’s trying too hard. If the Duesenberg brand is ever revived and those at the helm decide to build an SUV this is what it might look like. We could devote an entire review in an attempt to cover all the delights on display here, but we managed compile a few highlights that made a lasting impression on us.

Do you like crisp, attractively rendered screens? If that describes you, the Grand Wagoneer would like a word. It has a monstrous 75 inches of ‘em in total, which covers the instrument panel, infotainment system, the two monitors in the middle row (where Amazon Fire TV for Auto is standard for viewing pleasure) and one dedicated solely to the front passenger- that one is glossed over by a privacy barrier to dissuade the driver from peeking over while underway. It allows that lucky passenger to manipulate a few vehicle functions, but the one we thought was most clever is the ability to search destinations through the navigation system and then send the route directions to the main screen so the driver knows where to go. This is the first iteration of such a setup, but once competitors catch on, likely not the last.

Worried that the other passengers might come down with a nagging sense of FOMO from the lucky person who snagged shotgun? Don’t fret. Everyone on board is in for a treat as well, with over 20 (!) input ports sprinkled throughout the whisper quiet interior. They will also be appreciative of one feature that you won’t find listed on the spec sheet, and that is the luxury of a copious amount of space to stretch out and get comfortable in. All will be marvelled by the excellence of the factory installed stereo systems- in this case, the utterly brilliant McIntosh system which boasts 23 speakers and a cochlea crushing 1,375 watts of power ensures that your party’s favourite tunes are reproduced in incredible clarity. Rich detailing abounds everywhere you look, but the ignition button is particularly satisfying and has to be the nicest we have ever encountered, mounted in its own gorgeous nacelle surrounded by intricate stitching perched atop the dashboard.

The driving experience is just as polished as the vibe imparted by the interior. While this behemoth can seem a tad unwieldy navigating your local urban centre, it feels most at home on the highway. The combination of a plush ride courtesy of the standard air suspension and steering that lacks feel but possesses an excellent sense of path control make for journeys that evince themselves on the pleasant side of the motoring ledger- impressive when you consider the massive 22” wheel and tire package which normally does not do ride quality any favors. Unsurprisingly, this isn’t a vehicle that encourages spirited driving, not that most folks would ever consider hustling an SUV weighing in at 2,869 kilos in the twisties. If you do require the power necessary to set up a pass or merge smartly onto the highway, the 6.4 litre Hemi V8 is up to the task. The robust horsepower and torque figures are blunted by the Grand Wagoneer’s mass, but it gets up to speed with enthusiasm while emitting a pleasing, brassy yawp in the process. The downside of all the heady thrust and big displacement soundtrack make for fuel economy that is not what you would call frugal. Even with cylinder deactivation and as light a touch on the accelerator that we could safely manage, the big Hemi returned a fuel consumption figure of 20L/100km over a week of mixed driving which isn’t cause for celebration especially with current gas prices. Even when running only four cylinders- and you will know when that is by glancing at the instrument panel and when your ear picks up a slight change to a flatulent exhaust note- it becomes a 3.2 litre four banger that struggles to keep the Grand Wagoneer in motion, hardly surprising given the Jeep’s size and weight.  This appetite for fuel does not contrast favourably with the similarly sized Yukon Denali we tested recently which cuts that number in half, although it should be noted that that SUV was powered by a smaller, more efficient diesel engine.

Aside from the considerable thirst, we noted some other issues but none of them are dealbreakers. The styling polarized us into two distinct camps; some felt it to be somewhat ungainly and that the transition from pickup to jumbo SUV did not translate as favourably as some of the other players in the segment; others found its swagger appealing. The liberal use of chrome around all the windows is not to everyone’s taste, and some wished for the option of faux wood paneling (although we found several aftermarket sources who would be pleased to outfit your Grand Wagoneer thusly.) The digital rear view mirror made it seem like we were constantly being tailgated and meant a quick glance needed to check teeth for poppy seeds after lunch meant flipping down the visor instead. Adding to that very first world problem, we wondered aloud how the plethora of screens and technology fitted is going to hold up reliably after years of ownership.

The only other concern might be the Grand Wagoneer’s late arrival to the full-size luxury SUV segment and the delectable profits that has Stellantis salivating at adding to their coffers. That is not something buyers will be concerned with, but rather how quickly they can get their hands on one with inventories industry wide at an all time low. They will pay for the privilege of adding the Grand Wagoneer to their personal fleet because this baby carries a hefty price tag. Despite the lofty cost of admission, we can honestly say that the Jumbo Jeep is worth it. Jeep’s nascent luxury sub brand aspirations are not wildly out of sync with what competitors are charging- we have seen other examples achieving success on that front such as BMW’s Alpina XB7 and the Mercedes Benz GLS Maybach.

We took the Grand Wagoneer to Grandma for a visit and she was left speechless at how palatial Jeep’s new luxury liner is compared to her trusty steed from 29 years ago. With the electrification of product lineups in full swing, who knows how long the Grand Wagoneer will be available in its current anachronistic formula with its massive size and 6.4 litre V8. For families who require a full-size SUV that is loaded to the gunwales with the best luxury features available, they will find a compelling choice in Jeep’s Grand Wagoneer, just as Grandma did all those years ago.