Go ahead and build one for yourself on Land Rover’s online configurator; you shall find it is not possible to conceive one that does not look the business. 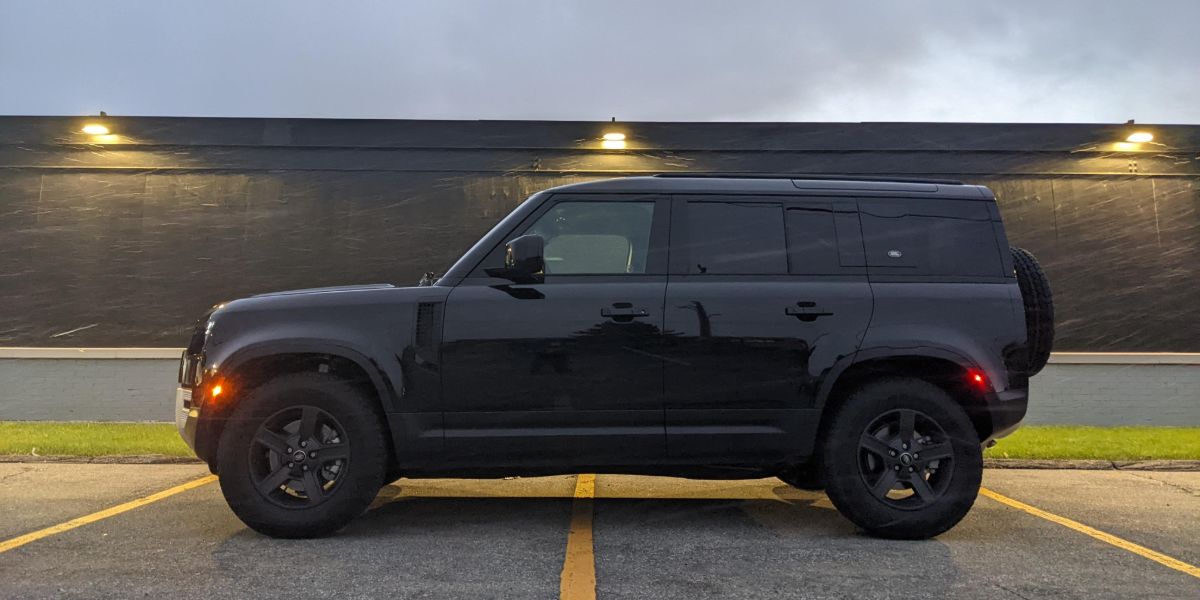 We have said it before: Nostalgia is one helluva drug. It has been known to cause dopamine laced floods of memories which predictably makes some folks behave in decidedly bizarre ways. Every enthusiast seems to know someone who just a few short years ago was really close to pulling the trigger on a ‘classic’ model from the ‘80s or ‘90s for much more than it sold for originally, despite outdated technology and the potential for expensive reliability gremlins. But cool is cool, and it can be hard to justify plunking down serious dollars for an experience you think you might like to live with day in and day out, even if the yearning to realize your David Silver fantasies from Beverly Hills, 90210 is strongly tugging at the regions of your brain where common sense resides. That’s right folks; you might remember West Beverly’s most promising nascent DJ driving a 1994 Defender 90 on the show, making the truck hugely popular with the mall going set, to say nothing of the countless real-world adventures and actual military use that made it a favourite of those needing a trusty go-anywhere vehicle.

If you know someone whose click finger trembled as their mouse hovered over the “BUY IT NOW!” button on some vintage car auction website, perhaps it is time to remind them that Land Rover revived the Defender- both in 90 (two door) and 110 (four door) variants for 2021. They are powered by your choice of no less than three different engines, offer a ton of off-road goodies to carry you well off the grid and retain the classic styling that has made them so desirable over the years- thankfully, the reboot manages to pull off the elusive skill of carefully embracing the past while combining modern touches to keep it relevant. Go ahead and build one for yourself on Land Rover’s online configurator; you shall find it is not possible to conceive one that does not look the business.

Our tester waited for us on a recent frigid morning, looking resolute and confident against a backdrop of fat snow flurries. Thoughts of flinging the Defender through snowbanks and power oversteer with the requisite rooster tails of powder kicked up by the rear wheels danced in our heads as we unlocked the doors and settled in. Unfortunately for us, the knee-deep snow never came and the most challenging obstacle our Defender faced was a gnarled unpaved cottage driveway, but at least the heated seats and steering wheel took the edge off the frosty temperatures in short order. What struck us as interesting was the way our tester was optioned, as we took the time to adjust mirrors and pair phones. It seemed to be a base model powered by the four-cylinder turbo, but in its current spec we were never left wanting in the equipment department despite many other examples we have encountered with more frippery. It only took a few short meters and some rough pavement to realize that it was air suspension at work underneath isolating us from the scabrous tarmac instead of the regular coil springs. If you promise yourself that you’ll show restraint at the dizzying number of options that you can put on this car if you decide to spec one out, do yourself a favor and check the box for the air suspenders- with the amount of comfort and off-road abilities it delivers, they are a must have in our opinion.

Prior to pickup we weren’t sure which engine would be under the hood and our shoulders slumped ever so slightly when we saw the P300 badge meaning no V8 or inline six under the hood; instead; we’d have the Ingenium turbo tasked with motivating our tester. Over the course of the week however, any distaste for the lowly engine slowly disappeared- this should be the powertrain of choice for the vast majority of Defender buyers. It offers much better power than expected and feels smoother than the last time we sampled this in a Jaguar XF sedan. An anemic engine this is not. Sure, more power is always great, and the bonkers supercharged V8 from the Range Rover Sport is available for those who insist on hedonistic levels of power if you’re willing to ignore the dismal fuel economy (and hefty price tag) that goes along with the glut of horsepower.

SUVs that are intensely focused on delivering off-road capability generally suck to drive on normal roads- if you have ever spent constantly herding a Jeep Wrangler between lane markings you know what we’re talking about. Yet with fully independent air suspension and steering that offers a surprising amount of precision the Defender proved to be very enjoyable to drive. Couple that with a rock-solid structure, stout brakes and an excellent 8-speed automatic transmission and the Defender feels more like a luxury SUV than single track terrorizer. It is smooth and refined in a way that no other rock crawling SUV has any right to be.

Our lightly optioned 110 model gave off an austere vibe when we took to the cockpit. There were no flashy trim bits or massaging seats that some might expect of an SUV at this price point. Yet as we mentioned earlier, it had all the stuff you could ever want and featured some welcome niceties like a digital dash and a great stereo. We found it easy to get comfortable in the leather trimmed seats despite a lack of power adjustment. But the biggest welcome surprise we encountered inside the Defender was its fantastic infotainment system. For so long, we have been let down by inferior, half baked infotainment systems in all the Jaguar Land Rover products we have driven over past years. They have managed the rare feet of being hopelessly clunky to operate while often freezing up or taking ages to respond to simple commands, never mind the subpar graphics which seemed 10 years past their best before date when new. Our Defender fixed all those issues in one full swoop to the point where you don’t cringe every time you need to change the radio station or reset the trip computer- now, however, it is quite enjoyable to use.

A couple of other noteworthy points on the Defender’s interior- instead of a sunroof, you get these neat skylights that are placed above the rear cargo area that don’t open but do allow for natural light to stream in and brighten things up a bit inside. Too bad that light will not make up for the lack of sightlines as the beefy pillars and rear tire hanging off the rear do not make for ideal rearward visibility. Luckily, there are a number of cameras and sensors on board that manage to take the edge off maneuvering the Defender in tight spaces and while parking.

The outward view is not anything to write home about, but it certainly isn’t a deal breaker. With the monumentally improved infotainment system that we usually bemoan in JLR products working perfectly there really wasn’t much that drew our ire while we had the Defender under our care. We did notice that some trim pieces would squeak in protest on cold mornings but disappeared once the cabin came up to temperature. Even with our tester’s small turbocharged four-cylinder providing motivation ostensibly to provide more agreeable fuel economy, we found that even light-footed driving doesn’t do much for frugal consumption- blame the Defender’s prodigious weight and heavy-duty running gear with permanent four-wheel drive for that. Lastly, there is always the elephant in the room where Land Rovers are concerned, and that is the question about long term reliability. If history has taught us anything it is that these rigs can be bogged down with electrical and air suspension issues, although it should be noted that we experienced zero problems during the Defender’s tenure in the Carpages Garage.

We encountered a Land Rover fan while filling up with gas and she remarked that the Defender is “really just a Jeep Wrangler or Ford Bronco for rich folks,” and while that seems damning with faint praise, it isn’t wholly inaccurate. We chose to remain silent in pointing out that if you option a Wrangler to the gunwales, it isn’t meaningfully cheaper than the Land Rover or that the Defender has just as much off-road acumen as its less sophisticated competitors yet offers far more comfort and usability in everyday driving. Of the three, we know which key fob we would reach for if the zombie apocalypse arrived tomorrow but spoiler alert: it wouldn’t be for the capable but brutish Americans. Then there is the way the Defender gets under your skin, and you find yourself praising its many charms while its flaws fade from your consciousness. Suffice it to say we thoroughly enjoyed flogging the Defender and we think that those in the market for a cool, luxury trimmed go-anywhere SUV will too…and David Silver would likely agree.