How to Stop a Car from Rusting? | Car Care Tips

Don’t wait until rust ruins your vehicle. Know how to stop a car from rusting with these tips. Also included is a DIY guide to repair rust spots.

HOME GUIDES How to Stop a Car from Rusting? | Car Care Tips 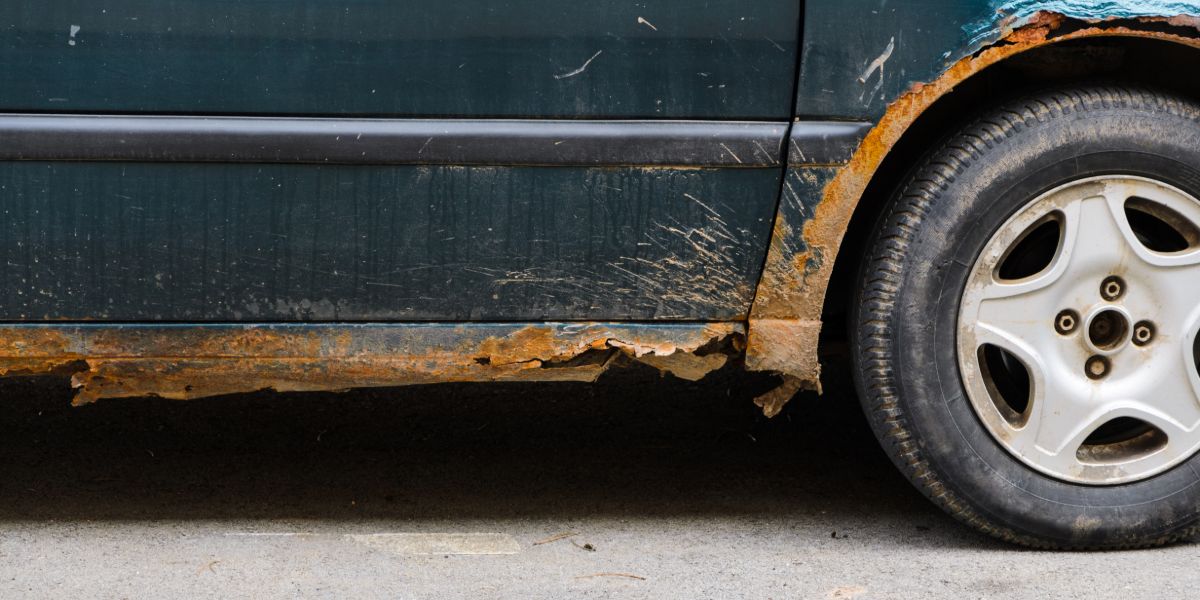 Rust can still send even the most luxurious car to an early grave despite the advanced alloys and coatings. It may be small at first, but rust never sleeps, so that brown stain on the fender will soon turn out into a costly repair. So, if you’re asking yourself how to stop a car from rusting, this post is for you.

I’ve got the best tips to prevent rust from causing damage to body panels or compromising the rigidity of your car’s frame. I’ll also help you understand how cars become rusty and how you can repair rust spots.

Now, you’ll be able to protect your car from the dreaded iron worm that can be a nightmare to control. Let’s get into it.

What Causes Rust on Cars?

Scientifically, rust is iron oxide. This molecule forms when iron and oxygen bond, causing iron-based metals’ breakdown. Keep in mind that most cars have iron directly on the engine and exhaust manifold. In addition, iron is also the main ingredient in steel. Since parts of the car’s chassis and frame are steel, most vehicle parts are susceptible to rusting.

There are various causes of rust in cars. Here are the most common.

There must be an anode, cathode, and electrolyte for rust to form. The metallic parts of your car act as the anode and cathode, while moisture becomes the electrolyte. If you live in a high humidity area, your car will likely develop rust even if it’s always under a cover.

Again, when water comes into contact with metal parts in your car, it’s going to trigger the rusting process. Rain is the fastest way for your vehicle to get a good soaking. That’s why it’s best to make sure your car is well-protected during the rainy season.

Saltwater is better at carrying electrons than plain water or water with low salt content. Furthermore, salt can eat away at your vehicle; that’s why cars on the coast are more likely to attract rust because of the high salt content and high humidity. In addition, ocean air can cause paint damage.

Moreover, it explains why cars in climates where salt is used in winter are more prone to rust than those in the southern environment.

You’re likely to miss a rust issue if you don’t maintain your vehicle regularly. I’m talking about waxing, washing, and physical checks that can help catch a rust spot early. Regular car maintenance is one of the best ways to stop a car from rusting.

How to Remove Car Rust Spots

If rust has already formed on various body parts, don’t panic. There are a few solutions to tackle this problem. The first thing you need to identify is the type of rust on your vehicle. There are three stages of rust; surface rust, scale rust and penetrating rust.

Surface rust shows up in minor nicks, scratches, and cracks, and it’s usually the first sign of a rust problem. It usually forms when paint breaks down due to UV or mechanical damage. Surface rust happens in vehicles, even in dry and warm climates. You’ll see it on the rotors, frame rails, wheel wells, and exhaust.

On these parts, all you need is to cut through the rust with a corrosive element like sandpaper and then add a rust inhibitor. Nevertheless, removing rust on a car’s paint is a bit of a process. Let’s tackle that next.

How to Remove Surface Rust on Car’s Paint

Step 1:  Clean the affected area and allow it to dry completely.

Step 2:  Use the painter’s tape to mask the area you’ll be working on.

Step 3: Apply a small amount of rust remover on the spot and let it sit for ten minutes.

Step 4: Use the microfiber cloth to wipe the area. Most of the rust will come off. But if it doesn’t, use the sandpaper to remove the leftovers. Next, wipe the residue completely.

Step 5: Clean the area with grease remover soap and wait for it to dry.

Step 6: Spray three light to medium coats of primer, allowing one hour between each application. Be sure to use short, dusty strokes to help build up the primer.

Step 7:  Spray five to six thin layers of the color base coat. Allow each layer to dry for 30 minutes to one hour, depending on humidity and outdoor temperature. Again, use light motions to prevent runs.

Step 8:  Spray a few layers of the clear coat and wait for at least 48 hours before washing your vehicle.

If you don’t repair surface rust, the decomposition penetrates further into the metal. This is where you see bubbles under the paint. The bubbles appear because rust molecules are bigger than steel and iron molecules.

After rust penetrates beneath the surface, it causes a rough, pitted patch called scale.

How to Remove Scale Rust

Step 1: Start with the wire brush and cut through the rust. Then, use a grinding wheel to remove the roughness.

Step 2: Smooth out the surface with the 320-grit sandpaper. Ensure that you don’t leave behind big flakes of rust and that you’re down to the bare metal. Even after using the 320-grit sandpaper, you will find that the area is still rough. This is good as it will allow the body filler to attach well.

Step 3: Brush on the automotive rust converter to the area to stop the rusting process.

Step 4: Mix a small quantity of the body filler with the hardener that comes with it for ten minutes max. Next, spread a thin layer of the filler evenly across the affected area and wait for 30 minutes to cure and harden.

Step 5: Use the 400-grit sandpaper to smooth out the filler. Make sure that the filler blends in with the existing paint job.

Step 6: Seal off the areas surrounding the portion you’re repairing with the clear plastic paper and painter’s tape.

Step 7:  Seal the affected area with primer and base color. You’ll require three medium layers of primer and two coats of base color paint. As I mentioned, apply the primer in short, dusty strokes and the base coat in fluid motions allowing ample time for each layer to dry.

For large rusty sections, you’re better off taking the car to a body shop since holes will have formed in the affected areas. You may need to replace the whole panel, which should be done at an auto body shop, or you’ll need to cut out the rotten parts and weld in new metal patches. Either way, a professional is better suited for the job than a DIYer.

How to Stop Rust from Spreading on Cars

To know how to stop a car from rusting, one must first take preventive measures to keep rust formation in the first place. Here are my top tips for protecting your car from rust.

Some people think that washing your car multiple times can damage its paint. However, the opposite is true since washing removes the impurities that kickstart the rusting process. It’s best to wash your car every two weeks, including the underbody, especially at the coast and in winter.

Wax Before the First Snowfall

Waxing before the first snowfall helps create an extra layer of protection against rust. It also slows down the rusting process when your vehicle gets exposed to moisture and salt.

A paved surface controls moisture exposure much better than a grass, snowy, or dirt parking spot. If your driveway has cracked asphalt surfaces, consider resurfacing it since the cracks expose your vehicle to unnecessary moisture.

Also, don’t park in a warm garage if your car is covered in slush and salt. Always clean it before keeping it in the garage.

The drain plugs, the hood and trunk, and those under the car doors often collect water and debris. While they are easy to overlook, they can play a crucial role in preventing rust from forming on your vehicle.

Moisture in the cabin is likely to find its way to the exterior. Hence, always dry spills as soon as they occur, and air-dry the interior completely.

Rust can destroy a car. That’s why it’s important to know how to stop a car from rusting. After all, you want to preserve your vehicle’s value because it’s an investment. Understanding how rust forms, how to repair rust spots, and how to protect your car from rust will go a long way in extending the life of your vehicle.

There are different products that you can use to prevent rust. One is a tar-based spray which is popular and affordable. A professional applies the tar-like coating onto the exposed surfaces. Once it dries and hardens, it provides a permanent shield against humidity, salt, and other elements.

You can also use dripless or drip oil spray for the underbody and internal parts. These products form a moisture barrier that prevents the formation of rust.

2. Can you remove rust permanently?

Yes. You can remove rust permanently. For example, you can sand down surface rust and spray the necessary layers of primer, color, and clear coat. In addition, you can also replace rusty panels or weld in new patches to remove rust that has penetrated the layers.

3. How much does it cost to fix rust spots on a car?

4. Will rust come back after repair?

As long as you remove the original rust entirely, rust should not come back. Meanwhile, ensure that you apply preventive measures to protect your car from rust formation.