The Mark 8 Volkswagen Golf R is Rather Excellent

Once you’ve joined the stream of fellow motorists, you’ll want to point the Golf R’s nose towards some sinuous tarmac.

HOME POPULAR The Mark 8 Volkswagen Golf R is Rather Excellent 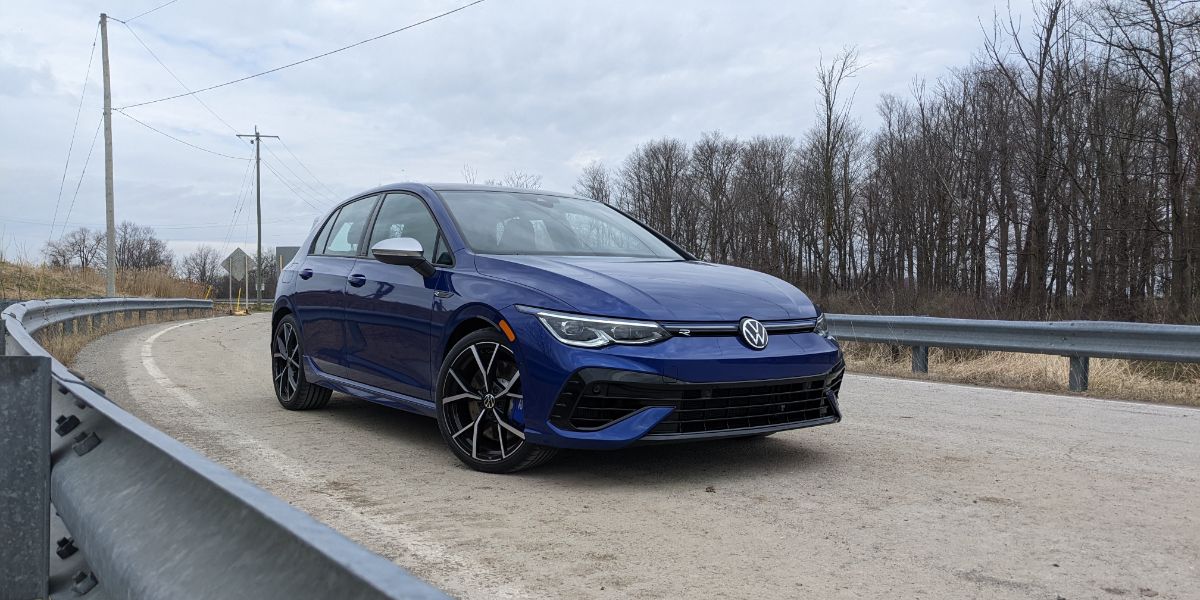 Picture this. You’re strolling the halls at Volkswagen Canada headquarters in Ajax, Ontario. Like all corporate mother ships, there’s plenty of self-aggrandizing celebratory kitsch to remind everyone who enters how wonderful the brand is. You have your typical standard fare which includes stuff like Car of the Year awards, press releases rhapsodizing lofty sales targets achieved and a litany of framed articles written in glowing prose aimed at its products- and many of those focus on the perennially brilliant Golf.

In the reception area, one thing stands out in particular, and it’s the poster sized copies of the uber-successful and now iconic VW Beetle Ads from the 1960s (Google them to see what we’re talking about.) They speak to a company that was known for the ultimate form-follows-function design ethos, the kind where every detail was sweated, and every detail mattered- nothing on the car was there if it didn’t offer the ultimate in efficiency and solid engineering. VW successfully traded on this heritage for many years, even up to the fairly recent “German Engineering” ad campaign from a few years ago (which, if you are interested, is one we much prefer over the current “Das Auto” slogan- but we digress.) It becomes clear that Volkswagen is a company that stands for no-nonsense precision. A company with exacting standards.

Then you step outside to retrieve the Golf R you have been excitedly looking forward to driving and that is where you encounter the new onboard digital interface that governs all interior functions that requires every single command- yep, even turning on the headlights and parking lamps to adjusting the audio system volume -into a tap, a swipe, or a slide. That’s right folks- buttons, long a mainstay of every automotive interior for the last century, are concerningly scarce. It stands to reason that VW decided to go in this design direction because everyone has a smartphone, tablet, or some other device for surfing the internet and watching cat videos so it should be a natural fit to migrate that interface with something conceptually similar- right? Wrong. We are unsure where to begin with our frustrations and general contempt we have for this technology. Is it the lethargic responses of said touchpoints, the fact that nothing is illuminated making executing commands at night mercilessly difficult, or the installation of the front and rear defogger switches (also haptic touch pads, naturally) installed to the left of the steering wheel? We’ll let you take your pick.

With that said, allow us to shut off the torrent of negativity to instead mention the redeeming qualities of this new direction VW is heading in, shall we? Here goes: with the removal of all buttons and having all interior functions relegated to the touchscreen, you must admit the clean, minimalistic vibe they were going for has indeed been achieved (But at what cost!?!?! -Ed.)

Do we view this misstep as a dealbreaker? At one point we thought that a possibility, but after a week living with it, we have concluded not. Once you get intimately acquainted with the system and figure out how to use it with a few workarounds at your disposal (Apple CarPlay, for starters) and get it dialed in to your liking, it becomes a minor annoyance that you learn live with. So why did we devote so much airtime to the subject?

We figured that since the Golf R is so incredible in every other facet that we should acknowledge the elephant in the room sooner that later- a quick Google search on the car’s infotainment subject will confirm that we aren’t the only ones slighted (to varying degrees) by VW’s decision to equip its star compact thusly. But here’s the thing- the confounding interface is really the only thing that drew our ire during the Golf R’s tenure with us. Its inherent excellence was the perfect salve to ease our tempers. We are going on record here: The Golf R is the best Golf ever, and we were utterly smitten by it.

Since we have spent an exhaustive amount of time talking about the inside, let us discuss the exterior for a welcome change of pace. The Mark 8 picks up where the Mark 7.5 left off, which means we have the expected boxy styling that appears less stodgy and much sleeker than before. The front and rear lighting elements are proof of that, and when regarded from the side profile the Golf R looks equal parts handsome and practical. The rear wing manages to be tasteful and restrained and the wheel gap to fender ratio that used to plague the hottest Golf is non-existent, with the car sitting purposefully on its striking 19” wheels. Smoked chrome mirror caps and quad exhaust pipes that look and sound the business round everything out nicely. Since we love to immerse ourselves in small details and other minutiae, we grew particularly fond of the stealthy Volkswagen script on the B-pillars and the thin light bar that connects the two headlamps together, making for a very distinctive illumination pattern at night. VW employs a similar styling strategy with the Golf that Porsche does with its iconic 911- they evolve with positive increments as each generation passes but the fundamentals have not changed much from the original.

Know what has changed though? The sound it makes. Boy, is it better than before; the outgoing Golf R had what VW referred to as a Soundaktor, something that was bolted to the firewall and would vibrate in sync with where the needle was on the tachometer- it was kind of like a much more intense version of the vibration you get with your phone on silent. From inside the car, it sounded like thrum from a Subaru flat four engine. Why they chose to do this is beyond us, but it seems like a lot of drivers agreed this was not cool judging by the heaps of online threads and videos illustrating how to disable it. The iron block E888 was always adept at carrying a tune, and with the Soundaktor gone it purrs contentedly at low revs escalating to a delightful snarl when chasing the redline. Exhaust burbles and pops are now on the menu as well.

You’ll be thankful the turbo four is such a sweetheart because the shorter gear and final drive ratios VW  chose has the engine turning a busy 3,000 at highway speed- where many a hot hatch would drone annoyingly making long trips a chore- but not in the R. A positive side effect of this is you usually don’t need to downshift in order to make a pass, and the 280-foot pounds of torque at your disposal make for an excellent rear-view mirror filling device.

The driving experience of the all-wheel drive Golf R can be tailored to your current mood with a variety of options with a variety of drive modes. You have the usual suspects like Comfort, Sport and Custom present and accounted for. But there’s two other modes that speak the loudest to us, the first being Drift Mode. After confirming on the infotainment system that you know what you’re getting into once it is selected, have at it. It draws the line at super long, lurid, full-opposite-lock kind of shenanigans, but it does allow for a healthy dose of oversteer (read: fun!) We cannot wait to flog one of these in the winter to see just how much of a hoot this car will be to flog on slick roads.

Finally, Special Mode (referred to as Nürburgring Mode) is the one that we favored out of the whole shebang. It’s perfectly dialed in for Canadian roads because it sets every setting to maximum attack while leaving the suspension in the Comfort setting, so you end with a Golf R that is deliciously pointy and alert but won’t threaten to shake your fillings loose on our horribly maintained roads. Curiously, Nürburgring Mode dials up the engine idle speed by 500 rpm, ostensibly to lend a ‘ready to pounce’ feeling to the driver- we noted that this helps smooth transitions when moving along from a stop, as simply releasing the clutch allows the Golf R to step neatly off the line and into traffic.

Once you’ve joined the stream of fellow motorists, you’ll want to point the Golf R’s nose towards some sinuous tarmac. Once you’ve shed the shackles of urban commuting, go ahead and show it some corners. You cannot help but smile the first time you toss it into a bend and relish the toothsome front end and how it inspires confidence to grab the uber-Golf by the scruff of the neck and toss it around. It digs in and just keeps gripping, regardless of the surface quality you are driving on. The trick AWD system plays a starring role here, but the suspension components have been massaged to the point where the Golf R is a legitimate steed for chasing- or leading- some very heady examples of pedigreed sports cars in the twisty bits. Another Golf R dynamic trait worth celebrating- the braking. The hottest Golfs never offered bragworthy stopping power in the past, but not anymore. The binders bite hard and offer excellent feel, and the beefy hardware showcased behind the 19” wheels are as effective at scrubbing off speed as they are easy on the eyes. The best part, and something the Golf R has always owned in this segment, is that when playtime is done the Golf R wipes that smirk off its face and transitions into the stoic, mature cruiser you want to get you home. Ride quality, even in its most aggressive setting, never beats you up and remains appreciably compliant.

So, for those wondering if the fundamentals that has made the Golf R such a compelling ride over the years remains intact, they can rest assured that not only does it remain true to its roots, but it is the best iteration of VW’s hot hatch ever. We admit that in the past, despite the Golf R offering AWD and more power over the GTI, it was never our favourite. We mused that while it was a great car, it was questionable whether or not it was worth the premium it commanded over the GTI. For the car’s eighth generation, we cannot profess that to be true any longer. The Golf R is so well rounded and exceptional in so many ways that it would be hard to place it second to the GTI (which itself is an incredible car- stay tuned for that review shortly.)

We enthusiasts and fans of Volkswagen hot hatches alike owe VW Canada a heartfelt thank you. That’s because unlike our counterparts oversees, we and only we get the manual gearbox while they must make do with the DSG gearbox as the sole choice of transmission. Is that because that Canada is one of the strongest markets worldwide for the Golf R? That likely played a part, but the fact that VW Canada priced the Golf R at the same amount as our U.S. neighbours to the south (yes, even despite the unfavourable currency exchange rate) is icing on an already delectable cake. For those of us who aren’t feeling the Civic Type R’s garish looks, or the I-don’t-know-how-to-relax intensity of the Hyundai Veloster N, the Golf R represents the sweet spot of the hot hatch genre. How long the Golf R will remain in its current for is anyone’s guess; better get yours while you can. We are sure you will agree that the Golf R is indeed rather excellent.