The 2022 Cadillac CT5 Deserves Your Admiration and Respect

The real magic reveals itself when you get it out onto the road. The CT5 is built on a version of General Motor’s Alpha platform which underpins the Chevy Camaro, among others, and it remains one of the best road going examples of GM engineering know-how; these folks can build some truly excellent, world class chassis when they put their minds to it.

HOME POPULAR The 2022 Cadillac CT5 Deserves Your Admiration and Respect 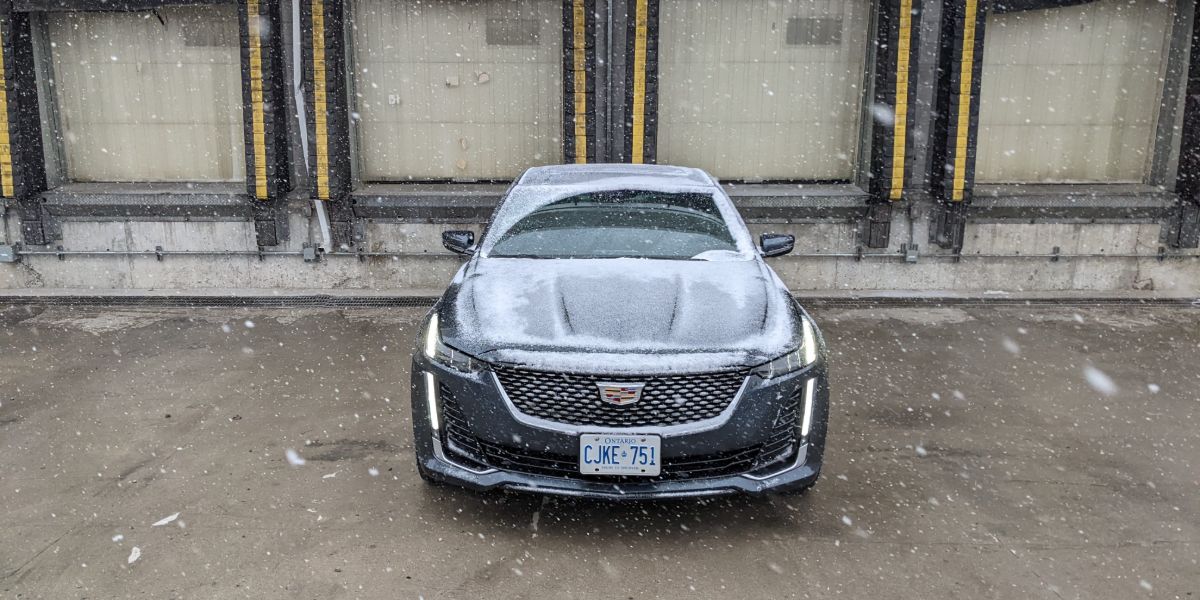 You can’t blame anyone for becoming desensitized to automotive marketing hyperbole. “New and Improved,” “Best Ever” and “Game Changer” are becoming tired old tropes applied to products that, after being constantly bombarded by empty promises and half assed efforts, begin to lose all meaning. 22 years ago we issued an apathetic shrug when Cadillac told us that they were going to reinvent themselves, hailing this massive effort as the Art and Science era. No more floaty land yachts, no more terrible cars like the Cimmaron and Catera, no more geezer-mobile stereotypes. Cadillac was very serious about this about-face even if the automotive world responded with a collective ‘yeah, right.’

Except it wasn’t just empty promises and limp wristed efforts from the storied domestic luxury marque. Instead, Cadillac embraced their new philosophy with honest vigor and commitment and began churning out cars that demanded to be taken seriously, slowly emerging from the shadows of the Broughams and El Dorados that were fixtures in parking lots across Fort Lauderdale. We fondly remember getting behind the wheel of a 2004 CTS-V for the first time, which married a truly excellent chassis to the engine and transmission from the Corvette Z06. It was not just an incredible car for a Cadillac; it was a bona fide world class sports sedan that could hold its own with the best from Europe. That car was clear evidence of following through on their transformational mandate- Cadillac wasn’t messing around.

Each passing model year brought meaningful progress towards their goal. OK, there were a few small missteps, like the somewhat cool but virtually unsellable ELR and the disastrous CUE infotainment system. Overall, however, things kept getting better and Caddy gifted us with such excellent cars as the Corvette-based XLR roadster and the still lusted after 2010 550 horsepower CTS-V wagon. Things were looking good.

Just recently, Cadillac announced that they intend to electrify their entire lineup by 2030, bidding so long to the internal combustion engine. The sad part? Just as their two-decade mission of contemporizing their brand reaches a climax- witness the excellent Escalade and the Blackwing performance sub brand as recent developments of that- they have decided to pull the plug. This is the equivalent of waiting your whole young life to get your drivers licence only to be told that cars have been outlawed. Even non-Cadillac fans were saddened by the news, not just the faithful who worship the wreath and crest.

With the upcoming bonkers Escalade-V and the Blackwing models gathering most headlines, we wanted to check out some of the everyday models offered by the brand. After all, they might not be overflowing with horsepower and luxury creature comforts but they are the cars that most Cadillac shoppers will be eyeing. And while they may lack the same cache as some of the more talked about versions, they are still an endangered species and compelling in their own right. Determined to soak up all we can before pistons are replaced by battery packs, we asked Cadillac for the keys to their CT5 in Premium Luxury trim to see what’s what before it too is relegated to the history books. The CT5 in question you see here is not a base model, but it is close- and it would give us a chance to see the inherent goodness, or lack thereof, in the CT5’s more basic form.

Right away we noticed something about the CT5’s size. A colleague remarked that it is a “tweener”- it is bigger than a BMW 3-series yet smaller than a 5-series. The other thing we noticed- or more specifically, didn’t notice- was any pretense of flashy styling. To our eyes, the CT5 is a handsome design but decidedly innocuous, flying under the radar with its Shadow Metallic grey livery and 18” wheels. This is not a car for those who like to be noticed; if that describes you, wait for the Blackwing model which can be decked in in some wild hues and carbon fibre aero addenda. It is well proportioned and will not offend anyone. Don’t let the lack of fanfare fool you though. This car is very much like an onion, requiring you to carefully peel away its layers to discover the delights that reside within.

The Cadillac of EVs is Here, Literally
Learn More About The 2023 Cadillac Lyriq

Let us start with the interior because it flies under the radar in the same way the exterior styling does. There is nothing here that grabs your attention, no flourishes of open pore wood or carbon fibre appliques we have come to expect in this class. Everything seems designed to draw as little attention to itself as possible, and the cockpit is pure form follows function. We also appreciated it for what it didn’t have. The CUE infotainment debacle has been euthanized in favor of a well thought out system that is extremely easy to live with. Any nods to Cadillac interiors of the past like chintzy build quality and questionable aesthetics are nowhere to be found. Instead, we found ourselves quietly appreciating minute details sprinkled throughout. Like the way the shifter feels perfect in your palm like a polished stone and works much better than typical electronic gear levers. We were drawn to the simple layout of the analogue instrument panel and the tactility on display courtesy of the hard buttons for the climate control system and seat heaters. Another clever detail: the CT5 remembers the drive mode you selected last and keeps in where you left it even after an ignition cycle. Why aren’t more manufactures doing this? Those who were raised on Cadillac’s legendary refinement will be pleased to know that the interior reamins a hushed and serene place to do your driving.

The real magic reveals itself when you get it out onto the road. The CT5 is built on a version of General Motor’s Alpha platform which underpins the Chevy Camaro, among others, and it remains one of the best road going examples of GM engineering know-how; these folks can build some truly excellent, world class chassis when they put their minds to it.

It does not take long for the CT5 to reveal its pedigree. The structure is rock solid and there is a keenness to the controls, a slop-free sharpness that had you just got out of a 1980 Coupe Deville it would feel alien. Our tester was not equipped with Cadillac’s incredible Magnetic Ride Control, but it didn’t seem to matter much because the CT5 shows disciplined body control without feeling too stiff. It exhibits a near perfect balance of ride and handling, something that is an increasing rarity these days.

Cadillac did not stop at honing just the chassis and suspenders either. We found the drivetrain to be surprisingly outstanding. Our tester had a 3.0 twin-turbo V6 mated to a 10-speed automatic, sending power to all four wheels through a rear biased all-wheel drive system. Too bad the stability control cannot be fully disabled to allow for some questionably juvenile bouts of playful oversteer, but the typical Cadillac customer will not care a bit. The V6 generates a modest 335 horsepower but counters with a broad shouldered 405 pounds foot of torque, making the CT5 feel quick on its feet. The V6 soundtrack plays through the car’s speakers, but this is one case where we did not mind at all, actually welcoming the angry snarl when we put our foot down. And for those times where you just want to get home in quiet luxury, the V6 will turn into a V4 under cruising and light loads to maximize fuel efficiency.

During our test, the local temperature plunged so low that the city declared an emergency extreme freezing weather alert. That is not exactly news that frigid temperatures are a thing here in Canada, and what we did find enlightening was how the CT5 fared after a 12-hour cold soak when we asked it to fire up remotely from the comfort of our cozy living room. The lights flashed, and the engine sprang to life normally and without the hesitation we have noted in other cars. Once the windscreen had thawed, we set off with the expectation of those horrible graunching noises frozen rubber bushings and suspension components make in protest, but there was nothing untoward at all. Kudos for Cadillac’s chilly weather testing team- they likely incurred a frost bite or three in making sure the CT5 gets you where you need to even in weather that would make Baffin Island look like a tropical destination.

So where did the CT5 put a foot wrong? What did it do to draw the ire of our very persnickety critical eye? Not much at all. What we did find bothersome are issues that are not particularly concerning in the big picture. We wished the side mirrors were bigger- it can be hard to see cars flanking you. The paddle shifters controlling the 10-speed transmission are a bit lazy when you summon a gear, and we know GM can do better at this because we drove a Camaro ZL1 years back so equipped and while it wouldn’t cause a Porsche PDK to worry, it was much snappier than what we experienced in the CT5. And this may be highly pedantic, but can we get back to Cadillacs with actual names? Seville, Deville, Fleetwood- we would enthusiastically welcome these monikers back because anything is better than the alphabet soup mandated by former Cadillac front man Johan de Nysschen.

One vestige of Cadillac’s past that we all agree should relegated to gather cobwebs in the dust bin of automotive history is the flaccid, overweight, and overwrought cars Cadillac used to make. The CT5 is such a quantum leap forward from its ancestors that you might wonder if they were even made by the same brand. We think it just might be the best representation of an American luxury car that you can buy, full stop. If you can think of a car built by a domestic manufacturer that can match the CT5 for its deft balance of dynamic brilliance and luxury acumen, we would like to hear about it. In a twist of fate no one saw coming 20-and-change years ago, BMW- who used to build the world’s best sports sedans- would now look to Cadillac as a benchmark when dialing in ride and handling profiles and steering feel for their own cars. There is a pleasant artistry to the engineering prowess on display here, so much so that we found the CT5 got under our skin much, much more than we would have ever imagined. It is truly a shame that so many buyers will snub the CT5 out of ambivalence or refusal to drive anything but the premium brands wheeled by their friends and neighbours. Anyone who does manage to get some right seat time in a CT5 will undoubtedly agree; this is one car that unequivocally deserves your admiration and respect.